William Blake was one of the most original voices to come out of the English creative traditions. He created an immense volume of literary and creative works. He was very influenced by the revolutionary politics of the time and embedded this into his own brand of moral philosophy and creativity. His work was largely ignored during his life time but a biography in the 1870s reinstated his career.  Social unrest was very active during his career and especially in the 1750s. Blake s writings fully reject the establishment.  He is full of anger and passion at the injustices of the time and was anti-racist a feminist and a socialist of the time. All this thinking was enmeshed in his own brand of religious thinking.  Although in his time he was considered mad he has a reputation that has grown with time.  He had many disciplines he was a poet, painter, printmaker and a creator of prophetic works.  He is now seen as a fore runner to modern day socialism, feminism and his prophetic works have been borne out by time.

Blake was an early creator of the visual and the written being combined.

Whitson another Blake scholar writes about how the Guttenberg style of literary dissemination is just a blip in the longer view of knowledge management and DH through our current revision is now bringing back the communal and co-creation of both the creation and consumption of knowledge.

This is supported by Blake’s quote:

Blake’s influence on DH is by now very well established in fact one can see him as a futurist in themes of describing a system which DH fits into very well.

Blake speaks directly to the digital world, he co-opted other artists work, he clearly believed in collaboration.

Blake was not in favour of emperies. He spoke of an integrated world view he believed that instead of specializing we should view the world as interrelated.

Blake rightly pointed out that a segregated view of the world that reduces and separates losses understanding and meaning.

“In the spirit of an integrated approach Blake urges an openness to the dept. dimensions of existence.“  ( Ray Peat)

Blake said “Everybody does not see alike. To the eye of a miser a Guinea is a more beautiful  than the sun…..The tree which moves some to tears of joy is in the eyes of another only a green thing that stands in the way…..   (Blake, 1988p 702)

In this quote he is completely undermining systemised dogmatic thinking.  Blake was not in favour of the empiricism of his time he was more in favour of a trans-disciplinary approach.  He argues for a lifting up of the creative cerebral process above limitation and categorization.  This world is mined out of the internal world out of the world of the senses mixed with the intellect.  He believed that relying on expert knowledge was too narrow a base to explore the world of creativity and ideas. This type of deductive rational knowledge was a linear repressive thought form, it does not allow for the broader humanist vision which was Blake’s.

He asked his viewers to step aside from the deductive and old mind sets and to avoid dogma to embrace the new with an open and free mind. Not to be fettered with the dogma of rational thought or thoughts that were based on past rational. He felt the empiric specialization of the disciplines was like a mental block and inhibited true thinking and true experience form which thinking could emerge.

Blake’s basic tenant put forward that the mind was more than reason that the mind had to remain connected to the senses in order for there to be a true understanding and thus a true knowledge.

In relation to Blake and DH he also shied away from the division of the disciplines. Instead he looked at the need to look at the wholeness of human existence.  Blake like DH liked to take an integrated approach and also imbedded the visual add to the meaning of text.  DH has developed the idea of how new technology can create connections between disciplines individuals and communities. With this increased connectedness there has to be an enhanced number of variables with which humanity can look at knowledge and new types of interconnected ness.

This new sphere like Blake’s work is going beyond the linear fixed texts and also creating a community of readers as it was in earlier time’s people receiving information together and commenting together. This has to have an impact on the creations that are being delivered and then modified as they are received.  This modification is then relaunched out to create new threads of knowledge.  It is created in fluid spaced not the fixed style or dogma of previous times.  These new spaces are not just open they are highly interactive.  They are also being created at such a speed it is causing the information to resist the fixing of previous times that came about through categorisation and immediate analysis. Thus as Blake would proscribe the information does not get time to settler in the senses as it does now due to the mercurial quality of the medium.

The leaving behind of print culture for the modern puts the Guthenburg parenthesis into contest as a mere span of time where knowledge was fixed in this way.  Knowledge is returning to an arena where it can be manipulated by the masses as it was previous to this parenthesis.

They have created a new forum around Blake which is in DH style it is truly collaborative, participatory and democratically driven…open and unfettered ( The William Blake Archive)

The new DH style is being supported by knowledge morphing away from top down limitations imposed by governance or literary style.  DH is mining a new hybrid type of knowledge harvesting out of the minds of the collective and creating a hive mind which is really close to some type of ecological entity with a life of its own like o flock of birds with a different leader coming out spontaneously creating a different movement with every change.

The William Blake Archive is one of the finest examples of DH they are in the process of digitizing all his work.   Blake’s philosophy is it seems very close to the emerging field of DH.  This new sphere believes that with the multi-modal use of tools you can get more creativity out of the individual into the public sphere.  This new mash up of mediums stretches the individual and pushes them to creation that goes beyond the reasoned rational due to the immediacy of the environment and the freedom it seems to enable.  Blake believed that to rest knowledge on the rational mind was too narrow a base from which to fully explore ideas and creativity this type of rational linear knowledge does not enhance the broader humanist vision which was Blake’s.

The mind joined with the senses can explore new areas of knowledge that leaves behind the rigidity of the rational. This world view looks at the creative process as a source of information not the dogmatic closed thinking more towards an open ended mind a process rather than an end product.

In conclusion Blake explored different   philosophies from a position of freedom he did not hold within the limits of his time.  Blake believed in an active mental process not a dogmatic retrospective view of a world, this is a similar mind-set that DH holds in my opinion. 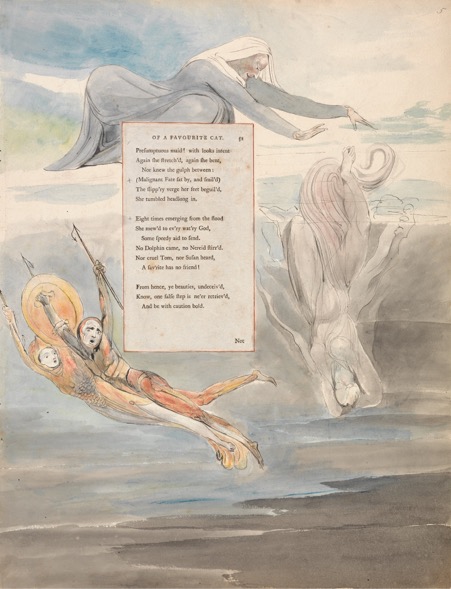 How the art and writing of William Blake combined word and image.

The poems of Thomas Grey 11, Ode on the death of a favourite cat.

William Blake as a biological visionary

Laura Quinney William Blake “On Self and Soul “

The blog of Blake archive and Blog Quarterly.